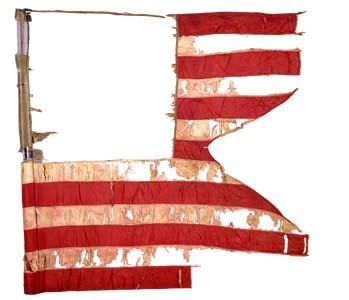 
The NYS Battle Flag Collection includes one flag carried by the 15th Independent Battery, a silk, swallowtail guidon in the “stars and stripes” pattern prescribed in General Order No. 4, dated January 18, 1862. Poorly stored over the last 150 years, the guidon was tightly furled around its staff in an uncontrolled environment. This caused damage to the flag, most noticeably to the canton where painted stars once appeared.