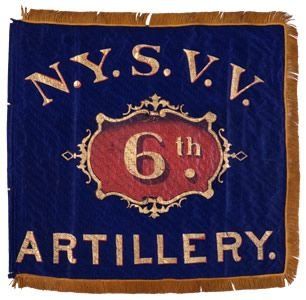 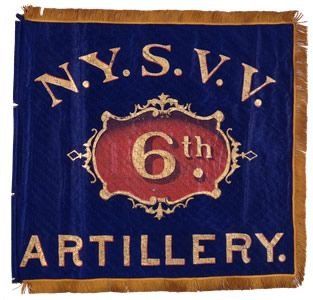 The 6th Regiment Artillery, New York Volunteers, mustered into service for three years as the 135th New York Volunteer Infantry on September 2, 1862. Converted into an artillery regiment and designated the 6th Artillery on October 6, 1862, the regiment recruited and mustered (for three years) two more companies on December 4, 1862. When their three year term expired, those entitled were discharged and the regiment continued in service as "Veteran Volunteers," as indicated by the "N.Y.S.V.V." along the top of these blue silk flank markers. Both flags feature painted inscriptions in gold, shadowed in red, along the top and bottom. Also, each features a red painted shield in the center framed with a gold painted ornamental border and the regiment's numeric designation painted in gold and shadowed in crimson. "N.Y.S.V.V." and "ARTILLERY." are in mirror image on the reverse while the numeric designation reads correctly (left to right).