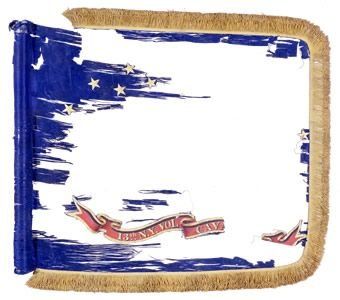 
Approximately 80% of this blue, silk standard is missing, most notably from the center. The standard originally included the Arms of United States painted in the center. Only six stars from the original thirteen remain. One star, as part of a previous repair, was sewn along the fly edge. A portion of the lower riband was also sewn to the fly as part of a previous repair. Yellow-colored tassel fringe lines the top, fly, and bottom edges.