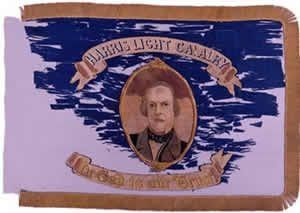 
The 2nd Regiment Cavalry, recruited and organized at Scarsdale, mustered into service for three years between August 9 and October 8, 1861. Originally known as the “Harris Light Cavalry” in honor of Montgomery County native and U.S. Senator from New York, Ira Harris, the regiment received this unique Tiffany & Co. embroidered standard with Senator Harris’ likeness on December 5, 1861 at Arlington Heights. The flag includes the regiment’s nickname embroidered above the portrait and an inspirational slogan, “In God is our Trust” embroidered below. In 1971 this flag was sandwiched between two layers of nylon netting with an additional layer of purple fabric to fill in the losses. The netting and purple fabric have been removed and the flag now rests on top of compensation fabrics to indicate the original size of the flag.