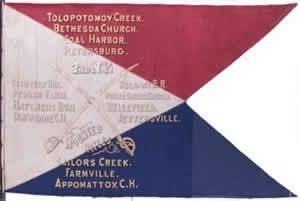 
Organized at Lockport and Buffalo, the 2nd Mounted Rifles initially served as infantry until November 1864 when the regiment received their mounts and joined the Army of the Potomac’s Cavalry Corps. R.T. Paine, Jr. presented this silk flag with painted inscriptions to the 2nd Mounted Rifles on July 4, 1865, five weeks prior to their muster out. In 1969, netting was sewn to the flag to preserve it, using different colors for the different sections. The original fly edge in the blue section is lost. The 1969 netting treatment included extra netting to the blue section to provide color compensation for the loss.