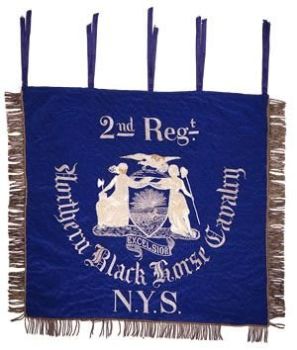 
On November 22, 1861, the 7th Regiment Cavalry, NY Volunteers assembled outside the courthouse in Troy, New York where John A. Griswold presented the regiment with the standard seen here on behalf of the "generous, warm-hearted and patriotic women" of Troy. The blue silk flag includes the Arms of the State of New York, the regiment's nickname, "Northern Black Horse Cavalry" in Old English script, and the unit's state designation, "2nd Regt. N.Y.S." in cream-colored silk embroidery. Atypically, the Arms and inscriptions read correctly when the hoist edge, the side with the attachment ties, is positioned along the top. Metallic bullion fringe lines the other three sides.