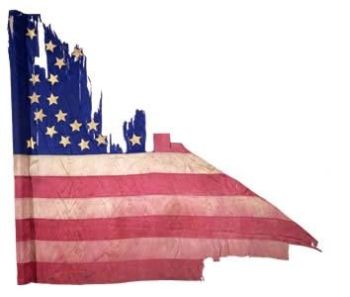 
The New York State Battle Flag Collection includes 5 silk guidons attributed to the 106th Regiment NY Volunteer Infantry including the example seen here. This silk swallowtail guidon in the U.S. national pattern adheres to the pattern prescribed in General Order No. 4, Headquarters of the U.S. Army, dated 18 January 1862. The flag's hoist edge is rolled over to create a staff sleeve. The flag has significant losses most notably to the canton and the upper tail.