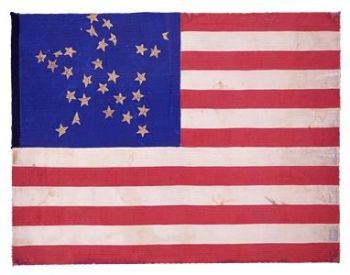 
Reportedly, Company B, 13th Regiment New York State Militia carried this silk national color when the regiment departed New York City on April 23, 1861, en route to Washington, D.C. The flag includes only 28 gold-painted stars, in part or whole, in the canton from most likely a 33-star pattern. The stars are arranged in a star pattern sometimes referred to as the "Great Luminary Pattern." Around 1940, the flag was machine-stitched between silk, off-white net and a blue infill fabric was used to disguise extensive losses in the canton. An additional, non-original, black ribbon was added along the hoist edge of the canton.