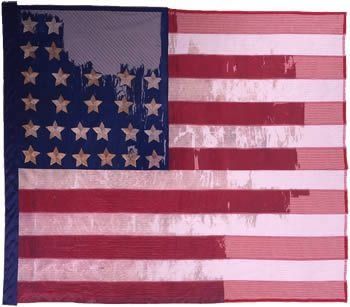 The 44th Regiment received its second national color, seen here, on January 16, 1863, as a gift from Mrs. Erastus Corning. First Division commanding officer, General Charles Griffin, made the presentation on Mrs. Corning’s behalf, in exchange for the regiment’s first national color, which Mrs. Corning had presented in October 1861. The regiment carried their second national color in all its engagements during 1863 and 1864. In 1976, restorers stitched this large, silk flag between two layers of nylon net and added a staff sleeve of a synthetic fabric, with a similar thread count to match the original silk. This flag features embroidered stars.