Col. John W. Latson received authority from the War Department, July 24, 1861, to recruit a regiment of artillery; of this the National Union Rangers formed part. Col. Jeremiah Palmer received authority from the Governor of the State to recruit a regiment of artillery, known as Governor Morgan's Light Artillery. August 24th Colonel Latson's authority was revoked, and October 18th these two organizations were consolidated, forming eight companies, and the new organization designated the 2d Regiment of Artillery. Captain Maguire's company of the Latson Artillery became Company A; the companies of Captains Kitching, Hogg, Jones, Klinck, Houseman, Clarke and Smith, became Companies B, C, D, E, F, G and H, respectively. December 5, 1861, there was assigned to the regiment, completing its organization, the so-called third battalion of the Morgan Artillery and the Flushing Artillery. The companies of Captains Griffin, Joslin and Halstead, of the Morgan Artillery, became Companies I, K and M, and the Flushing Artillery, Capt. Thomas L. Robinson, Company L; the men of Company M of the Morgan Artillery were assigned to Companies I and M. The regiment was organized at Staten Island for a service of three years. The companies were mustered in the United States service at Staten Island, A and E October 2; B August 23; C and D September 18; F, G and H October 15; I and K December 11; L November 18; M December 12, 1861. In June, 1862, a number of Indians, members of Company F, were discharged. November 19, 1863, Battery L, which served detached from the regiment since March, 1862, as a light battery, was permanently detached and became the 34th Battery; it was replaced by a new company in January, 1864. At the expiration of its term of service, those entitled thereto were discharged, and the regiment retained in the service. June 27, 1865, the regiment was consolidated into eight companies, the men of Company I being transferred to Companies A and E; those of K to A, C and F; of L to B, C, D and H; and of M to A, G and H; and the members of the 9th Artillery, not discharged on the muster-out of their regiment, were transferred to it as Companies I, K, L and M. 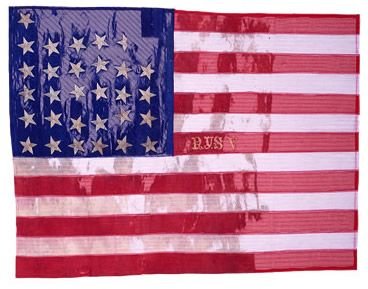 This flag attributed to the 2nd Regiment Artillery, New York Volunteers, currently includes only 30 embroidered stars from either a 35, or 36-star… 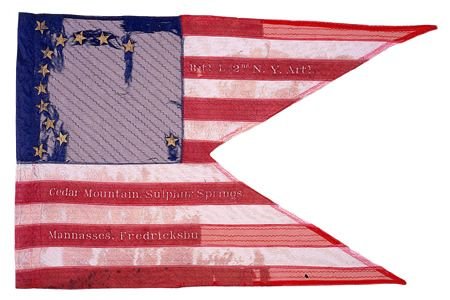 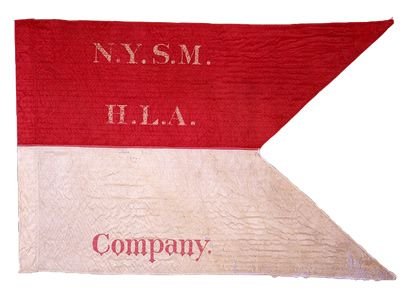 Gale, W. Hector. Roster of the Second New York Artillery a list of the survivors together with their post office addresses. Free Press Print.

Haas, James E. This gunner at his piece: College Point, New York & the Civil War, with biographies of the men who served. Baltimore, MD : Gateway Press, 2002.

Roback, Henry. The veteran volunteers of Herkimer and Otsego counties in the War of the rebellion, being a history of the 152d N.Y.V., with scenes, incidents, etc., which occured in the ranks of the 34th N.Y., 97th N.Y., 121st N.Y., 2d N.Y. heavy artillery, and 1st and 2d N.Y. mounted rifles. Also the active part performed by the boys in Blue who were associated with the 152d N.Y.V. in Gen. Hancock's Second army corps, during Grant's campaign, from the Wilderness to the surrender of Gen. Lee at Appo-mattox court house, Va. Compiled and edited by Henry Roback. Little Falls: [Utica, Press of L. C. Childs & Son, 1888].

Roemer, Jacob. Reminiscences of the War of the rebellion, 1861-1865, by Bvt.-Maj. Jacob Roemer, Battery L, Second N.Y. artillery, and Thirty-fourth N.Y.V.V. ind. Lt. battery. Edited by L. A. Furney. Published by the estate of Jacob Roemer. Flushing: [Press of the Flushing Journal], 1897.