The following is taken from New York in the War of the Rebellion, 3rd ed. Frederick Phisterer. Albany: J. B. Lyon Company, 1912.
This regiment was organized by the State October 29, 1861, at New York City, by the consolidation of the Mechanic Rifles, Col. James H. Bull, with the Governor's Guard, Col. Joseph C. Pinckney, of the 6th Militia, with the latter as Colonel. The Putnam Rifles, the Leslie Guard and part of the Empire Zouaves had previously been merged into the Governor's Guard, of which the 6th Militia formed the nucleus. The regiment was recruited at New York City (a few men were from New Jersey), and there mustered in the service of the United States for three years November 4, 1861. At the expiration of its term of service, the men entitled thereto were discharged, and the regiment retained in service.
It left the state November 16, 1861, served in Graham's Brigade, Buell's, later Keyes', Division Army of the Potomac, from November, 1861; in French's Brigade, Sumner's Division' Army of the Potomac, from January, 1862; in same, 3d Brigade, Richardson's, 1st Division, 2& Corps, Army of the Potomac, from March, 1862; in 1st Brigade, 1st Division, 2d Corps, from August, 1862; in 3d Brigade, 1st Division, 2d Corps, from September, 1862; in 4th Brigade, 1st Division, 2d Corps, Army of the Potomac, from March, 1864- at Fort Richmond, New York harbor, from May, 1865; and, commanded by Col. John S. Hammell, it was honorably discharged and mustered out August 30, 1865, at New York City.
During its service the regiment lost by death, killed in action, 8 officers, 60 enlisted men- of wounds received in action, 2 officers, 37 enlisted men; of disease and other causes, 4 officers, 120 enlisted men; total, 14 officers, 217 enlisted men; aggregate, 231; of whom 2 officers, 54 enlisted men died in the hands of the enemy.

The following is taken from The Union army: a history of military affairs in the loyal states, 1861-65 -- records of the regiments in the Union army -- cyclopedia of battles -- memoirs of commanders and soldiers. Madison, WI: Federal Pub. Co., 1908. volume II.
Sixty-sixth Infantry.—Cols., Joseph C. Pinckney, Orlando H. Morris, John S. Hammell; Lieut.-Cols., James H. Bull, John S. Hammell; Majs., Orlando H. Morris, Peter Nelson. The 66th, the "Governor's Guard," was the outgrowth of the 6th militia, recruited mainly in New York city, and was mustered into the U. S. service at New York, Nov. 4, 1861, for a three years' term. It left New York for Washington, Nov. 16, 1861, was assigned to Graham's brigade, Buell's division, until Jan., 1862, when it became a part of French's brigade, Sumner's division, which became in March, the 3d brigade, 1st division, 2nd corps, Army of the Potomac. It reached the Peninsula in time to be present during the latter part of the siege of Yorktown; was active at Fair Oaks and during the Seven Days' battles, but suffered its most severe loss at Antietam, where 103 were killed, wounded or captured, among them Chaplain Dwight, who was in the midst of the fight. The 66th proceeded through Charlestown, W. Va., and Snicker's gap, to Fredericks-burg, where it lost 75 in killed, wounded and missing out of 238 engaged. It was then in the 3d (Zook's) brigade of Hancock's division, which also suffered severely at Chancellorsville, the loss of the 66th being 70 men. The 2nd corps continued to see arduous service through the hard fought field of Gettysburg and the actions at Auburn and Bristoe Station, the last being a 2nd corps engagement. After the Mine Run movement the regiment went into winter quarters with the Army of the Potomac and when the spring campaign opened, was assigned to the 4th brigade of its old division. In Grant's campaign in the Wilderness the heaviest losses of the 66th were suffered during the first week, but it continued in active service through Cold Harbor, where Col. Morris, com-manding the brigade was killed, and the siege of Petersburg, losing heavily in the first assault on the fortifications. In the autumn of 1864 the original members not reenlisted were mustered out and the reenlisted men and recruits remained at the front as a veteran organization. After the fall of Petersburg the regiment was ordered to Fort Richmond, New York harbor, and there remained until Aug. 30, when it was mustered out, having lost 107 from wounds during the term of service and 124 from other causes. 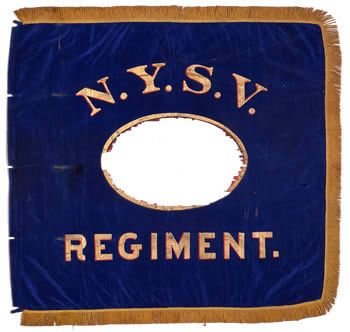 This blue silk presentation flank marker features painted inscriptions and yellow silk fringe. Formerly stored folded in a bag, almost all of the…