The following is taken from New York in the War of the Rebellion, 3rd ed. Frederick Phisterer. Albany: J. B. Lyon Company, 1912.
This regiment, Col. Robert Nugent, originally recruited under special authority from the War Department, was turned over to the state September 2, 1861, and organized in New York city as one of the regiments of the Irish, or Meagher's, Brigade, November 2, 1861. It was mustered in the service of the United States for three years between September 7 and November 17, 1861. A large number of the members of the 69th Militia joined the regiment, on their return from their three months' service, and the majority of the men were recruited in New York city, Company D, however, principally at Chicago, Ill.; Company F partly at Brooklyn, and K partly at Buffalo. June 12, 1863, the regiment was consolidated into a battalion of two companies, A and B. In February, 1864, this battalion returned from its veteran furlough with six companies, A, B, C, F, G and K; Band F being the former Companies B and A; the others being newly organized. At the expiration of its term of service, those entitled thereto were mustered out and the regiment retained in service.
The regiment left the state, November 18, 1861; served at Fort Corcoran, D. c., from November, I861; in the Irish Brigade, Sumner's Division, Army of the Potomac, from December, 1861; in the same, 2d, Brigade, Richardson's, 1st Division, 2d Corps, Army of the Potomac, from March, 1862; and it was honorably discharged and mustered out, under Colonel Nugent, June 30, I865, near Alexandria, Va.
During its service the regiment lost by death, killed in action, 8 officers, 154 enlisted men; of wounds received in action, 5 officers, 94 enlisted men; of disease and other causes, 2 officers, 149 enlisted men; total, 15 officers, 397 enlisted men; aggregate, 412; of whom I officer and 63 enlisted men died in the hands of the enemy.

The following is taken from The Union army: a history of military affairs in the loyal states, 1861-65 -- records of the regiments in the Union army -- cyclopedia of battles -- memoirs of commanders and soldiers. Madison, WI: Federal Pub. Co., 1908. volume II.
Sixty-ninth Infantry.—Cols., Robert Nugent, William Wilson; Lieut.-Cols., James Kelly, James E. McGee, John Garrett, James J. Smith; Majs., James Cavanagh, John Garrett, Richard Moro-ney. The 69th, the 1st regiment of the Irish brigade, was the outgrowth of the 69th militia (q. v.) and contained members from New York city, Chicago, Il1., Brooklyn and Buffalo. It was mustered into the U. S. service at New York city Sept. 7 to Nov. 17, 1861, for three years, and left for Washington on Nov. 18. It was stationed at Fort Corcoran near Washington and became a part of the Irish brigade under Gen. Meagher in December. At the time of the general advance under Gen. McClellan in March, 1862, the Irish brigade became the 2nd brigade, 1st division, 2nd corps, and moved to the Peninsula in April after having its first encounter with the enemy at Rappahannock Station, Va. The part taken by the brigade in the siege of Yorktown was not especially prominent, but its prompt action at Fair Oaks helped to save the day, and during the Seven Days' battles it was constantly in action, the 69th alone losing 208 in killed, wounded and missing. At the second Bull Run the division arrived too late for the battle but at Antietam the Irish brigade was in the midst of the fight at the "Bloody Lane," where the loss of the regiment was 196 in killed, wounded and missing out of 317 engaged. After the battle the regiment was withdrawn to Charlestown, W. Va., and then moved via Snicker's gap and Hartwood Church to Fredericksburg, where it again suffered severely in the desperate but unsuccessful assault on Marye's heights, the total loss being 128. The winter was passed in camp near Falmouth; the regiment was prominent in the Chan-cellorsville campaign and again at Gettysburg; then fought at Auburn and Bristoe Station; shared in the Mine Run campaign; and went into winter quarters near Brandy Station. The loss of the regiment was so severe that in June, 1863, it became necessary to consolidate it into two companies. In Dec. and Jan., 1863-64, a large number of these tried soldiers reenlisted and upon their return from veteran furlough received the addition of many new recruits, which insured the continuance of the regiment in the field as a veteran organization. The regiment bore a heavy part in the battles of the Wilderness and Cold Harbor; lost heavily in the first assault on Petersburg; remained in position before Peters-burg during the long siege; was active at the Weldon railroad, Strawberry Plains, Reams' station, Hatcher's run and the Appo-mattox campaign, and was finally mustered out at Alexandria, June 30, 1865. The 69th lost the greatest number of men killed or wounded of any of the New York regiments. It ranks 6th in total loss among all the regiments in the Union army and 7th in percentage of loss to total enrollment. The total number enrolled was 1,513, of whom 261 died from wounds and 151 from other causes, 63 dying in prisons. 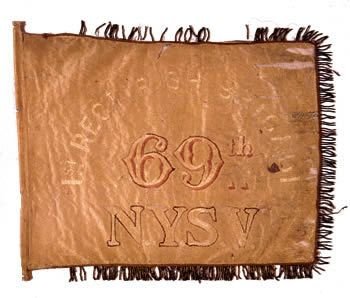 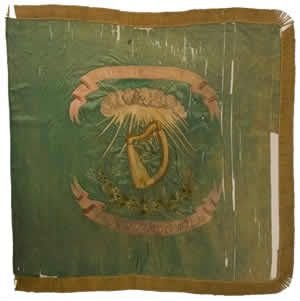 On November 18, 1861, a group of New York City Irish-American ladies presented this green silk “Irish Color” to the 69th New York Volunteers. The… 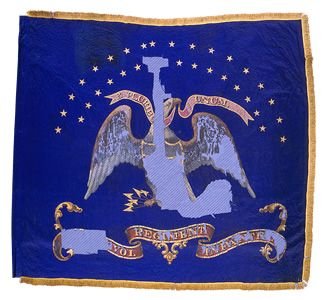 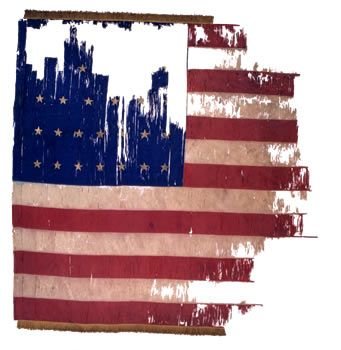 The 69th Regiment New York Volunteer Infantry received a national color, most likely the flag seen here, from the City of New York in early 1863. The… 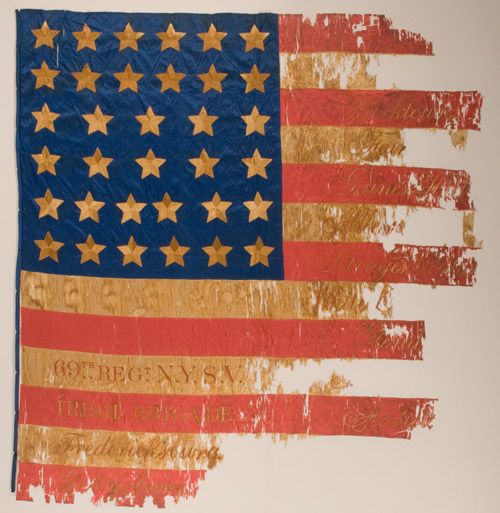 Civil War Newspaper Clippings
This is also available in PDF format. These are large files; however, they are exact images of the pages.

Boyle, Frank A. A party of mad fellows : the story of the Irish regiments in the Army of the Potomac. Dayton, Ohio: Morningside House, Inc, 1996.

Clarke, Joseph I.C. "The Ballad of the Sixty-ninth" Lyrics only.

Conyngham, David Power, 1840-1883. The Irish brigade and its campaigns : with some account of the Corcoran legion, and sketches of the principal officers. New York: W. McSorley & co, 1867.

Loback, Tom. Civil War flags of the Irish Brigade and others in the 69th Regiment's Armory collection. S.l. s.n, 1999.

Nugnet, Robert. "The Sixty-ninth at Fredericksburg: General Nugent's Description of the Splendid Work that was performed by the Irish Brigade Before Marye's Heights, December 11-15, 1862." Annual Report of the State Historian. pp. 34-45.