The following is taken from New York in the War of the Rebellion, 3rd ed. Frederick Phisterer. Albany: J. B. Lyon Company, 1912.
This regiment, located at New York city, was ordered, April 24, 1861, to prepare for service. The order having been revoked, the regiment volunteered for three years, and entered the service of the United States in May and June, 1861. It's original company, D, became the 3d Battery (Vols.), and December 7, 1861, the regiment received the designation, 82nd Volunteers. It is not now in existence.

The following is taken from Third Annual Report of the Bureau of Military Statistics of the State of New York, Albany: [The Bureau], (C. Wendell), 1866.
In addition to the regiments heretofore enumerated, the Second, Ninth, Fourteenth and Seventy-ninth militia volunteered for the war, and were known respectively as the Eighty-second, Eighty-third, Eighty-fourth and Seventy-ninth New York Volunteers. An account of their services belongs properly to that of the State volunteer troops. The Second, Fourteenth, and Seventy-ninth participated in the battle of Bull Run. The Ninth at the time of the battle was at Harper's Ferry, under General Patterson. The Second fought in the Second brigade (Schenck's) of the First division (Tyler's.) Its loss, as reported a week after the battle, was 24 killed and 27 wounded. The Fourteenth was in the First brigade Second division. Its loss was 25 killed and 58 wounded, besides prisoners. The Seventy-ninth was in the Third brigade (Sherman's), First division. Its loss was 32 killed, 51 wounded and 115 missing. Among the killed was Colonel Cameron, the commanding officer. 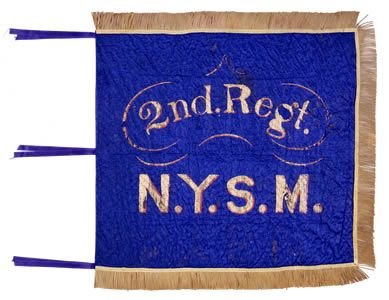 This blue silk flank marker features painted inscriptions on both sides and twisted and looped fringe along the top, fly and bottom edges. Confederate…