The following is taken from New York in the War of the Rebellion, 3rd ed. Frederick Phisterer. Albany: J. B. Lyon Company, 1912.
This regiment was recruited in New York city, organized under Col. William Wilson on Staten Island, and accepted by the State May 22, 1861. It was mustered in the service of the United States for two years, Companies A, B, C, D and E April 30, and F, G, H, I and K May 25, 1861. A number of the members of Company B, Empire City Guard, an incomplete organization, joined Company D of this regiment.
The regiment left the State June 15, 1861; served at Santa Rosa Island, Fla., Department of Florida, from June 23, 1861; three companies at Fort Jefferson, Fla., from January, 1862; in Department of the South, from March, 1862; in the West District of the Department of the South, from April, 1862; at Pensacola, Fla., from May 9, 1862; in the Department of the Gulf, from November, 1862; in the First Brigade (Dwight's), Grover's Division, Department of the Gulf, from December 30, 1862; in the 1st Brigade, 4th Division, 19th Corps, from March, 1863; on the expiration of its term of service it was returned to New York city, and there, under Colonel Wilson, honorably discharged and mustered out June 25, 1863.
During its service the regiment lost by death, killed in action, 12 enlisted men; of wounds received in action, 3 enlisted men; of disease and other causes, 34 enlisted men; total, 49.

The following is taken from The Union army: a history of military affairs in the loyal states, 1861-65 -- records of the regiments in the Union army -- cyclopedia of battles -- memoirs of commanders and soldiers. Madison, WI: Federal Pub. Co., 1908.
Sixth Infantry.—Col., William Wilson; Lieut.-Cols., John Creighton, Michael Cassidy; Majs., William Newby, James W. Burgess. The 6th, recruited in New York city and known as Wilson's Zouaves, was mustered into the U. S. service at Tompkinsville, April 30 and May 25, 1861, for two years. It left New York city on June 15 on the steamer Vanderbilt for Santa Rosa island, Fla., where it encamped near Fort Pickens. Cos. A, B and C were stationed at Key West and Tortugas, and Cos. G and I at batteries Lincoln and Cameron. The companies remaining at the original camp were attacked in October and fell back to battery Totten. In Nov., 1861, and Jan., 1862, the fortifications of Pensacola were bombarded, the regiment taking part in the attack, and upon the evacuation of the city in May the 6th was quartered in the town, Cos. G and I being stationed at Fort Barrancas. It was ordered to New Orleans in Nov., 1862, where it was attached to Sherman's division and later to Grover's division, with which it moved to Baton Rouge. In March, 1863, the 4th division (Grover's), of the 19th corps was ordered to Brashear City and took part in an expedition to Irish bend, where an engagement ensued in which the 6th was active, as also at Vermillion bayou. Upon returning it was ordered to Alexandria and there embarked for New York city, where it was mustered out on June 25, 1863. The original members numbered 770, of whom 14 were killed or died of wounds, and 32 died from other causes. 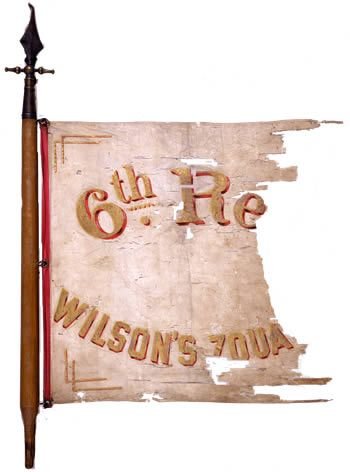 Presented to the 6th Regiment NY Volunteer Infantry by Thomas C. Burns on behalf of the citizens of Staten Island, New York, this white silk guide…

Brown, Harvey. Attack on Santa Rosa Island: October 9, 1861: Colonel Brown's Report. S.l.: Rebellion record, 1862. Consists of reports and accounts regarding the Oct. 9., 1861 Confederate attack on Union positions (and Wilson's Zouaves New York regiment) on Santa Rosa Island, Florida. The federal reports are written by Col. Harvey Brown and Col. William Wilson of the Union Army. Accounts are also included from the Augusta Constitutionalist, the Atlanta Intelligencer, and the Mobile Advertiser, along with statements from soldiers and observers from both sides.

Morris, Gouverneur. The history of a volunteer regiment, being a succinct account of the organization, services and adventures of the Sixth regiment, New York volunteers, infantry, known as Wilson zouaves. Where they went, what they did, and what they saw in the War of the rebellion, 1861 to 1865. Prepared from official data by Gouverneur Morris. Illustrated by James E. Taylor. New York, Veteran Volunteer pub. co., 1891. 160 p. illus., 2 maps, ports.

Shanahan, M. Letter, Oct. 13, 1861.
Abstract: Letter to James Hamm mailed from Camp Esau, Pensacola, Florida giving an exultant account of the raid at Santa Rosa and on "the camp of Billy Wilsons famous Zouaves."
Note(s): Bio/History: Soldier in the 9th Mississippi Infantry Regiment, who was at the battle of Santa Rosa when Confederate troops under command of General Richard Anderson made a surprise attack on the Union forces there, specifically routing Wilson's Zouaves.
Located at the Abraham Lincoln Presidential Library.